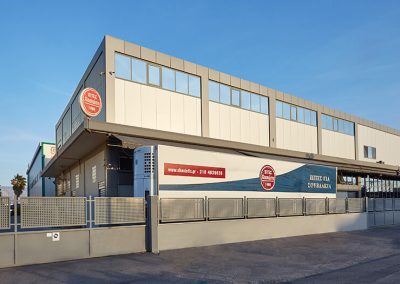 Pita Bread Chasioti has the state of the art equipment that allows the company to meet the client’s requirements.

The company holds a costumer portfolio that comprises the largest well known grill houses and restaurants in the areas of Attica and Messogia. Nationwide, our distribution network covers the Peloponnese, the Ionian Islands, Cyclades and the Dodecanese. Since 2004, we expanded internationally, exporting to several countries.

Our staffs is comprised of 60 employees who are constantly trained with the newest productions technologies.

The selection of our raw material is performed in accordance to the strictest criteria of European Union directives.

In 1982 Stavros Chasiotis and Kiriaki Papadopoulou created a small unit of pita production which succeeded the traditional family bakery (operating since 1960).

Chasiotis’s company, is initially located at 84 N.Zervou Str., Kallithea. Its production capacity runs up to 6,000 pieces of pita per hour. The business flourishes as demand and clientele increase accordingly.

In 2002, the enterprise relocates to larger premises at 3 Themidos Str., Moschato, in order to accommodate the continuously increasing demand.The best part of the production becomes automated while the production capacity increases to 12,000 pieces of pita per hour.

In 2004 the company successfully ventures in to the English market.

The selection of raw and auxiliary materials is based on strict criteria, respecting all rules of hygiene, in accordance with European Union standards.

In 2011 the company moves to new modern proprietary facilities at 36 Bichaki Str., at Agios Ioannis Rentis, with a total area of 2,000 sq.m., responding once again the growing market needs.

In 2019 the company expanded its facilities with 1,000 additional sq.m. to the first floor, with new offices, modern warehouses and a production section.

Equipment is drastically renewed while the production capacity has increased to the significant quota of reaches 30,000 pieces of pita per hour.

Contact
We use cookies to provide you with the best possible experience on our site. If you continue to use the site, we'll assume you're happy with it.OkNoPrivacy policy