How Greek Pita Bread was born

Antonis Papadopoulos was born in 1931 in Apsallos Edessa, and in 1944 he came to Athens along with his brother Kyriakos, to work in their uncle Lambrakis’s bakery at Nikea Athens.

During the German occupation, the Italians teach Greek bakers how to prepare them their favourite traditional “galeta”. The Greek pie as we know it today is essentially a mix between this Italian “galeta” and a kind of bread they made in Mikra Asia and looked like a pie. The bakery of Lambrakis and Hatzis were the first who produced the Greek pita in the form that lasts until today.

Antonis and Kiriakos Papadopoulos learn the job next to their uncle and in 1952 decide to make their own small production company for pitas in Pangrati. They sublet a bakery and they go from early at night to ferment, shape, prepare the dough and bake the pitas in the oven.

Then, pack the pitas in cardboard boxes and crates, and distribute them with wagon, tricycle, even by foot. For longer distances they were forced to use the bus or tram, as getting on a car was a big luxury, let alone using trucks.

The production reaches 200-300 pitas per hour and the price is 4-5 dimes. However, the oven is operating normally and this means that the work of the two brothers must be completed by 3 am because this is the time that the baker starts the process for the production of bread. 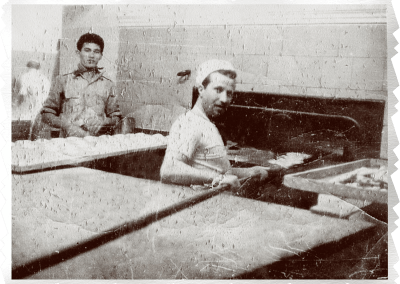 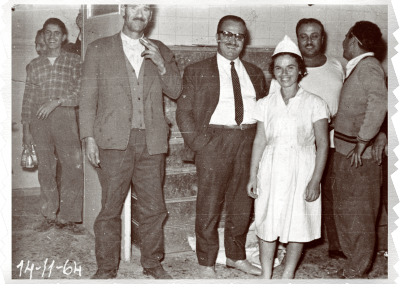 1964 – A Snapshot in the KAP factory at Kallithea

1964 – A Snapshot in the KAP factory at Kallithea

Over the next few years, the Papadopoulos brothers moved to a new bakery in the old slaughterhouse area (Piraeus & Hamosternas) and after that at another spot in Andromache street in Kallithea. The great leap was made in 1961, when they started in N. Zervou street, in a modern factory, to produce pitas and biscuits called KAP (Kyriakos-Antonis Papadopoulos).

Antonis Papadopoulos starts monitoring all international fairs that were related to the bakery business, soon he travels to Germany, France, Italy, Sweden and Israel, where he finds a patent relating to the “touch” of the pita bread- which was then done by hand, with fingers – and he adjusted into the Greek version. The pita bread, is not baked in the wood oven, but in a large electric oven on a conveyor belt. The workforce of the company reaches 90 people and the daily production reaches 50,000-60,000 pitas. The KAP is the only modern pita factory at the time. But the conditions of production and distribution are changing radically.

The Papadopoulos brothers opted for great expansion of the business and significant bank loans and credit. While production goes well, profits are thrown into purchasing equipment and machines for biscuits and crisps. Eventually, in 1973, due to mismanagement and the large credit allowance to the customers, the company is driven in to bankruptcy and the seizure of the productions facility. It was a devastating time and for the family was very difficult to accept the fact that literally in one night the efforts of a lifetime were lost and taken away.

Antonis Papadopoulos, very loyal to his brother Kyriakos, stay together till the end and make a huge effort to stand on their feet, once again, but they don’t have the success they expected. It was not until 1983 when the third generation of the family takes steps up to restore their lost dreams. Stavros Chasiotis (husband of the daughter of Antonis Papadopoulos) is ultimately the one who succeeds. 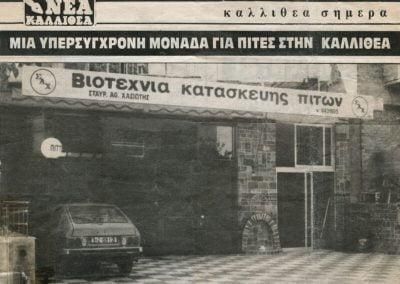